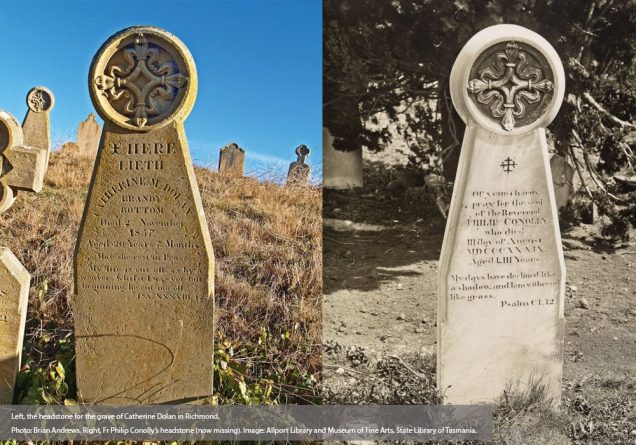 A recent card commemorating the bi-centenary of Fr Philip Conolly’s arrival in Tasmania on 14 April 1821 featured a photograph of his headstone, surely a heritage treasure. Unfortunately, it no longer exists. When, in 1918, his mortal remains were exhumed from the old Barrack Street Catholic cemetery and re-interred in St Mary’s Cathedral, his headstone was evidently seen to be of no significance and its preservation was thus neglected. At least, we have the photo, and it can tell us much.

Fr Conolly died on 3 August 1839, but his headstone cannot be earlier than the second half of 1844. The reason for this is because it was a local copy of an English limestone exemplar designed by Pugin and brought out to Hobart Town in the Bella Marina by his friend Bishop William Willson, arriving on 14 May of that year. Pugin designed four such exemplar headstones for Willson in 1843, followed by a further twelve in 1848, and these were duly copied in Catholic cemeteries across Tasmania. At least 64 such copies have been identified, making it likely that there are more Pugin-designed headstones in Tasmania than in England where each design was used but once.

We may confidently claim that Bishop Willson himself, soon after his arrival in Hobart Town, was responsible for the erection of such a fine memorial over the grave of his pioneering predecessor. From the photographic evidence it is clear that Fr Conolly’s headstone was the closest in proportions and detail to the English exemplar, incorporating typical Pugin details such as the incised foliated cross directly below the circular top. Measurements of local copies reveal wide variations in details. When local stonemasons copied an exemplar, the notion of making a dimensionally precise replica seems not to have been evident.

To date, nine copies of the exemplar used for Conolly’s headstone have been identified, located in Cornelian Bay, Richmond, Colebrook, Campbell Town and Kingston. (In this latter, the circular top is missing). Our illustration depicts the headstone in Richmond cemetery of Catherine Dolan who died on 2 November 1857. Another copy is visible in the background.