Watching 24 hours with the Lord 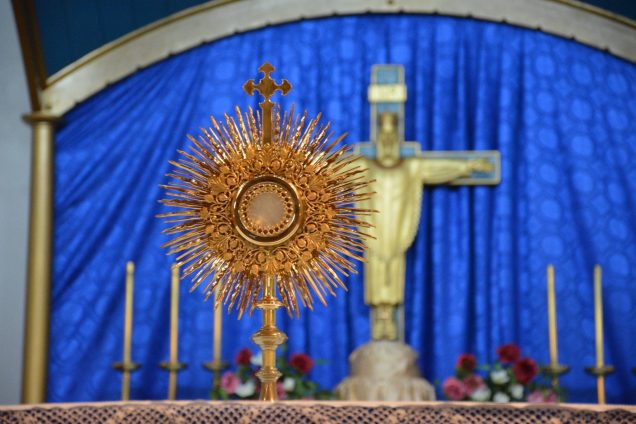 Parishes around Tasmania responded wholeheartedly to Pope Francis’s call to give 24 Hours for the Lord as part of Easter preparations.

He started the 24 Hours for the Lord initiative in 2014, which has since become a worldwide Lenten initiative for Catholics to receive the mercy of God through Eucharistic adoration and confession.

It takes place each year on the Friday and Saturday before the fourth Sunday of Lent.

At St Mary’s Cathedral Parish in Hobart, 24 Hours for the Lord started at 6pm on March 26 and ended at 5pm with Benediction on March 27, followed by 6pm Mass.

The parishes of Sandy Bay and South Hobart combined their efforts, with both Church of the Holy Spirit, Sandy Bay, and St Francis Xavier’s Church, South Hobart, open for Eucharistic adoration and the sacrament of Reconciliation.

“We had a steady attendance,” Fr Perera said.

“It was a time for peace and consolation for people.”

In Launceston Parish, 24 Hours for the Lord took place at the Church of the Apostles, as part of a host of preparations for Holy Week and Easter. Launceston parish priest Fr Mark Freeman said that good numbers of people attended, and that the sessions were “very moving and prayerful”.

At Mersey-Leven Parish, the event was spread between Ulverstone and Devonport.

Assistant priest Fr Steven Smith said that Easter can be a hectic time making it difficult for some people to focus on the Lord.

“This gave people a chance to cut out from the world for a while and get in touch with what we are really celebrating at Easter,” Fr Smith said.

Central Tasmania Parish started its 24 Hours for the Lord with the Stations of the Cross and ended the next day with a Saturday Vigil Mass at New Norfolk. In a packed schedule, during the 24 hours it held parish Lenten Reconciliation, the rosary, Divine Mercy prayers, the Litany of Precious Blood, as well as Eucharistic-oriented prayers and readings from the sacred scripture.

“I hope it is repeated next year. It is good to help people appreciate [the mercy of God through Eucharistic Adoration and confession] during the Lenten season.”

While a number of Tasmanian parishes offered the event for the first time this year, it was the seventh consecutive year at the Huon Valley Parish, with adoration for nearly 24 hours, starting at St Mary of the Cross, Ranelagh, and then continuing at St James Church, Cygnet, with three time slots for Confession.

Parish priest Fr Warren Edwards commented on the positive spiritual effect of having 24 hours of adoration. He also paid tribute to the Little Eucharistic Brothers of Divine Will, based at Dover, for their support of the initiative.