Jessie Banez ordained to the priesthood 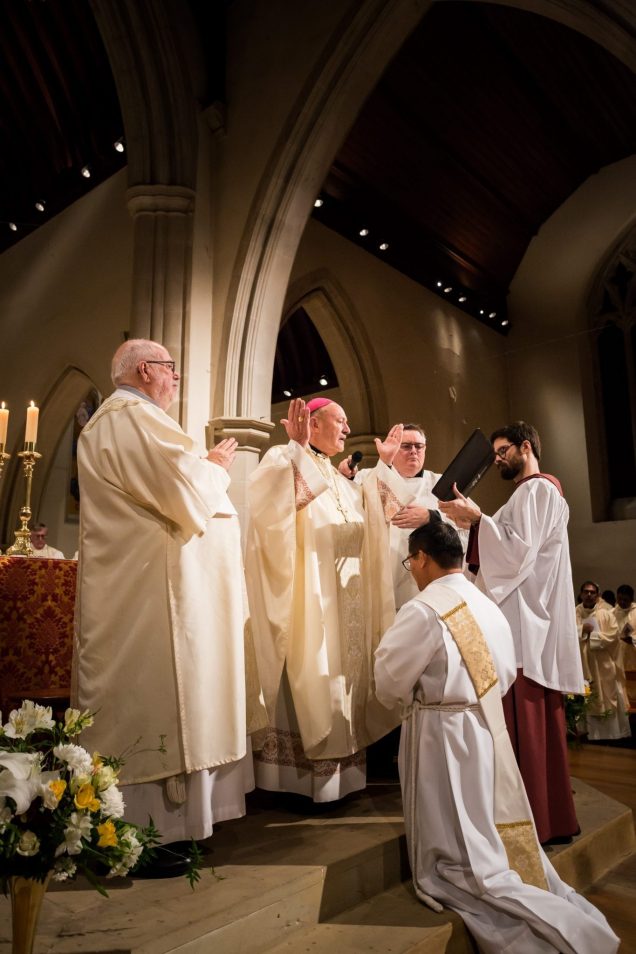 The Archdiocese of Hobart has celebrated the ordination of Jessie Banez just a week before marking the 200th anniversary celebrations of the arrival of the first priest to Tasmania.

The latest in a number of priestly vocations for Tasmania, Fr Banez is the eighth priest ordained for the Archdiocese of Hobart in the past six years.

Of those eight, six vocations were from those born overseas, and two were local vocations.

Fr Banez, 44, who was ordained at St Mary’s Cathedral on April 9, did not have a straightforward path to the priesthood.

“It’s really a winding road, a long journey, but at the end, God wins,” he said.

Born in the Philippines, from the age of seven or eight he had the desire to become a priest, spurred on by the kindness and example of his local parish priest.

When at age 12 he wanted to join the minor seminary, his parents asked if he would compromise and study at a Catholic school instead.

After high school, he once again tried to enter the seminary, but his mother discouraged him, wanting him to discover other options for his life. The paperwork for the seminary had been done, and he had a date to leave his family, but his mother wanted him to study at university in Manila instead.

Fr Banez instead decided to find work and spent a year in a restaurant. At the end of the year he followed his parents’ advice and enrolled in a Bachelor of Science in Chemistry. One year before completing his degree, he dropped out.

Still searching for direction, Fr Banez entered military school. He was focused on entering the Navy, but three years in – one year before graduation – he left the academy.

He then took up a course in ship mechanics, and found accommodation by volunteering at a shelter for homeless children run by the Salesians.

He says God used that experience to deepen his meaning in life and open his heart again to the priesthood.

He stayed with the Salesians for seven years – including studying with them – but discovered that he didn’t have a vocation to their community.

“I said to them: ‘I’ll join the Archdiocese in Manila.’”

After five years of study, his mother passed away and Fr Banez was faced with the responsibility of dealing with the family property.

He took temporary leave from the seminary, which soon became a two year absence.

In the meantime, a friend from seminary had travelled to Australia and was now studying at Corpus Christi seminary in Melbourne.

He encouraged Fr Banez to apply for the Archdiocese of Hobart.

Fr Banez travelled to Tasmania in 2015 and says he felt an immediate affinity for the state.

After five days, Archbishop Julian invited him to become a seminarian for the Archdiocese.

Then at the end of 2016, after waiting nine months for a visa, Fr Banez arrived in Australia. This time, to stay.

On September 25 last year he was ordained a deacon.

“Everything is grace – because I was thinking that I’ll be a priest in Manila. It never dawned on me that I would be a priest in another country,” he said.

He says his family – who couldn’t attend the ordination but watched via livestreaming – were all very proud of him, and that a nephew has also just entered the seminary.

He says that in a pluralistic country like Australia where knowledge of God is diminishing, he is challenged by the idea of how to be an effective priest.

But what brings him joy is being at peace with his vocation, and being who God has made him to be.

“And it’s a bit consoling, because whether in good times or in bad times, if you find that kind of peace, that will make you a better priest,” Fr Banez said.

In his homily for the ordination Mass, Archbishop Julian acknowledged the long path Fr Banez had taken to the priesthood.

“One of the clear tests of a vocation is that it persists deep in the heart even when circumstances seem to inhibit its realization. That it persists is a sign that it is from God and not just human inclination,” His Grace said.

Fr Banez celebrated his thanksgiving Mass at Holy Spirit Church in Sandy Bay, and another Mass in Bridgewater-Brighton Parish to thank the local Filipino community.

He says he doesn’t want to compare the Philippines and Australia, but that his experience of being accepted by people in Australia has been enormous – a manifestation of God’s love for him.

“I’m happy that I will be ministering here with the Australian people.”