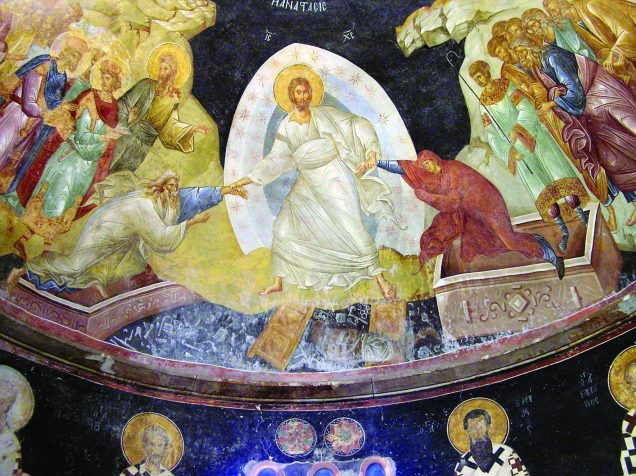 In his famous poem, The Divine Comedy, Dante Alighieri writes about his descent into hell, guided by the ancient poet, Virgil. As they approach the gates of hell Dante is alarmed by the archway warning: “I am the way of woe, I am the way into eternal pain… Abandon all hope you who enter here.”

Descending through the circles of hell the poets are confronted by different demonic creatures who attempt to prevent the poets entering into their domain. At one stage the poets’ journey was almost thwarted had not an angel of light come to open the way by casting aside the evil oppressors.

It is striking that these oppressors seek to prevent Dante, a still living being, from entering into their hellish torment. Why do they repel Dante rather than embracing him and trying to enchain him in their eternal torment?

The answer lies in the fact that a Living Being appeared previously in hell and pillaged many souls from these tormentors. Who is this Living Being? The evil tormentors are afraid even to speak his name, referring to him only as the Powerful One, the One whose entrance into hell shook the very foundations of that wicked place.

We see in this poem the Christian belief of the harrowing of hell, in which Christ descended into hell in order to unbind those righteous souls who were awaiting their coming Saviour. Jesus’ descent into hell occurred between his death on Good Friday and his resurrection on Easter Sunday.

One can imagine the immense joy of souls like Adam and Eve, Sarah and Abraham, Rebekah and Isaac, Naomi and Ruth, Isaiah and Jeremiah, and many others who died before Christ but who, in faith, eagerly awaited the One who would redeem them.

Dante depicts the demons in fear of another living being, one like Christ, who might despoil them of the souls they torment and consider to be their own possession. And so they fiercely defend their spoil.

The great joy of Easter is that Christ has triumphed over the curse of sin, death, and Satan himself. This victory is often depicted, particularly in Eastern icons, with Christ bursting forth from his sepulchre, clutching Adam and Eve by the wrist and wrenching them out of death, away from the dominion of the evil one.

This powerful image is worth contemplating this Easter as it will enable us to depth the glorious mystery of our salvation. Indeed, it invites us to glory in the cross and resurrection of our truly wonderful Saviour, Jesus Christ.