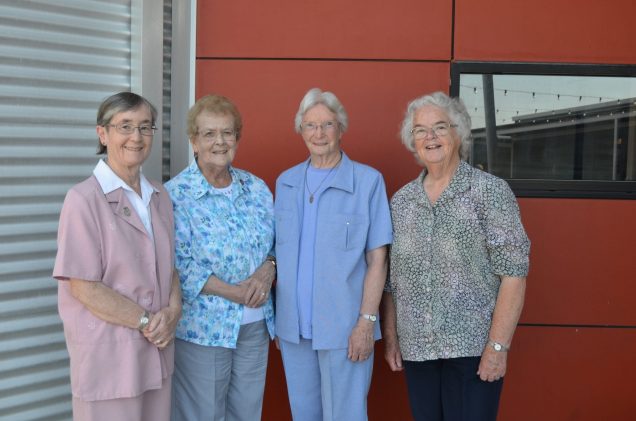 The Presentation Sisters have made a positive impact on the lives of many thousands of Tasmanians through the network of schools they set up around the state.

They will continue to improve the lives of many more in years to come, as a significant new housing project gets under way in the south of the state.

The legacy of the Presentation Sisters in Tasmania over the past 155 years was recognised in Launceston today when they were inducted onto the 2021 Tasmanian Honour Roll of Women.

Sr Gabrielle Morgan PBVM, Congregation Leader of the Presentation Sisters in Tasmania, said she was stunned and delighted at the honour.

“I feel gratitude for the recognition of the contribution that we, the Sisters, have been enabled to make in relation to the education, in particular, of young women and girls, and the significant impact that the Presentation Sisters have made, and continue to make, in the broader community,” Sr Morgan said.

That contribution began in 1866 when four sisters and five candidates arrived in Hobart from Ireland. The Sisters went on to set up schools in Hobart, Launceston, Bellerive, Lindisfarne, Queenstown, Beaconsfield, George Town, Karoola, Lilydale and Longford, and took over a school at New Norfolk.

“This recognition is an important reminder of the significance of your achievements and the inspiration they provide to all women and girls.”

In more recent times, the Sisters have dedicated themselves to pastoral work, supporting immigrants, refugees and the marginalised in society. The Presentation Sisters continue to be inspired by the charism of their foundress, Nano Nagle, as Sr Morgan explained.

“Nano Nagle contributed all that she was and all that she had to the betterment of those living in Ireland in penal times, particularly through education of the poor,” she said.

“We are continuing the legacy that Nano Nagle began. Our founding sisters built those little schools in country areas as well as those that catered for larger numbers in urban areas. Education remains very much part of our legacy. While most of us are no longer in the classroom, we endeavour to support in various ways, forms of lifelong learning that are part of a holistic education today.”

“The other part of our legacy is in the CatholicCare development on our property at Blackmans Bay. It fits with Nano Nagle’s plea, ‘spend yourselves for the poor’ and today that is clearly expressed in the need for affordable housing.”

Building work is expected to start soon on the three hectare site that the Sisters have given to the Archdiocese of Hobart. CatholicCare Tasmania, together with Centacare Evolve Housing, is developing the land into a mix of private, affordable and social housing. Some of the housing will be for vulnerable women, people with disabilities and families in need.

The Presentation Sisters bought the site in 1929 and it has been used as a spirituality centre since 1979.

In inducting the Presentation Sisters onto the Tasmanian Honour Roll of Women at a function at the Tailrace Centre, Launceston, the State Minister for Women, Sarah Courtney, said: “This recognition is an important reminder of the significance of your achievements and the inspiration they provide to all women and girls.”