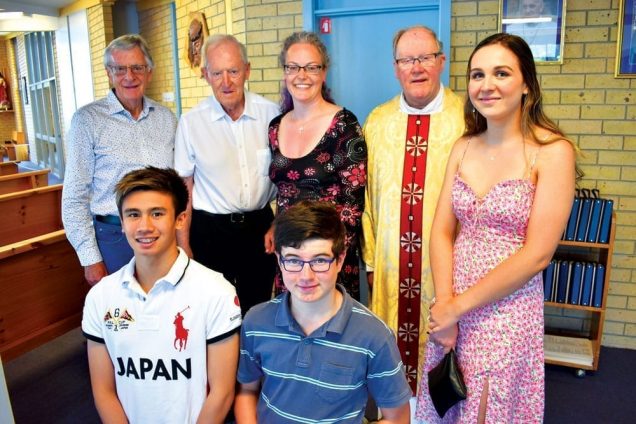 Fr Chris Hope, who once celebrated New Year’s Day Mass on top of Mt Sinai and who was ordained by a canonised saint, says that the most fulfilling aspect of his priestly ministry has been celebrating the Sunday Eucharist with the people.

On January 6 this year, Fr Hope marked 55 years as a priest. Then over the weekend of January 9 and 10 he was farewelled by the Kingston-Channel community, retiring from the role of parish priest after 21 and a half years.

Saying goodbye to the parish was very hard, Fr Hope says, but he has already been visited by parishioners in his new home in Sandy Bay.

“Those friendship links and family links, if you like, remain,” he said.

Archbishop Guilford Young was a significant influence at the time of his decision (“He was young and vibrant, and all that, and he knew your name”) and it was Archbishop Young who arranged for him to finish his priestly studies in Rome.

He began his studies at the Propaganda Fide College on October 15, 1962. Just four days earlier, on October 11, the Second Vatican Council had begun.

“It was wonderful, marvellous. Even then I didn’t appreciate it fully – as fully at the time as I do now – but it was still very exciting,” Fr Hope said.

“… All these bishops and the buzz around Rome was pretty much terrific.”

He and his fellow seminarians would sometimes be called to assist the Cardinal of Propaganda Fide in the sessions or serve at the Masses.

The Propaganda Fide College had a summer villa at Castel Gandolfo – the traditional summer residence of the Popes. He recalls Pope St John XXIII speaking to their group on one occasion.

He was in Rome when Pope St John XXIII died and saw his body carried through the crowds.

He was present for the coronation Pope St Paul VI, and when he became a sub-deacon, the Pope presented him with a breviary. Then in 1966 Pope St Paul VI ordained him to the priesthood at St Peter’s Basilica.

He still reads the homily the Pope gave at his ordination every year.

After his ordination, Fr Hope stayed on in Rome to study scripture at the Pontifical Biblical Institute. He also spent a semester in Jerusalem, and on New Year’s Day, 1969 celebrated Mass on top of Mt Sinai with a small group.

He returned to Tasmania in 1970, and was appointed as assistant priest at the cathedral and chaplain to the Italian community.

“I loved that. The Italian community was great. And I was appreciative of being able to use my Italian.”

However, he soon began teaching at the seminary in Victoria, a role which became full-time.

Fr Hope returned to parish ministry in 1980, serving briefly in Lindisfarne, before being assigned to Glenorchy Parish, where he oversaw the redesign of St John the Baptist Church; then Launceston Parish where he arranged for the completion of the tower at Church of the Apostles; and then finally to Kingston-Channel Parish, where he was priest during the extension of St Aloysius College to secondary education.

He says he has been lucky to spend significant lengths of time in his parishes.

“One of my greatest enjoyments always was celebrating the Eucharist on a Saturday night or a Sunday with the community.”

Now retired from the role of parish priest, he hopes to do more in sharing scripture, and undertake a retreat that was postponed due to COVID.

Above all in his priesthood, he says he has been grateful for the support of the people.

“… We’re working together. And so that help and support and love and care that I’ve received from people over the years … that’s the main thing.”