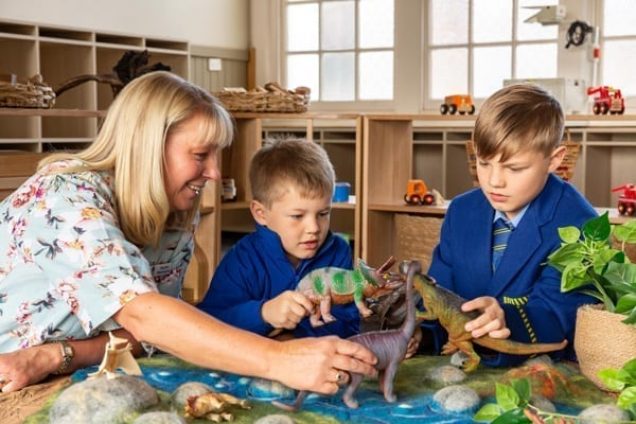 The new school year means a fresh start for brothers Ethan, 4, and Mason, 8, who have joined St Virgil’s College in its first year of offering a Kindergarten program.

The Hobart junior campus has traditionally offered single-sex education for boys starting in Grade 3, but from this year, will also offer Kindergarten.

Prep and Grades 1 and 2 will be offered in successive years as the first Early Years cohort moves through.

Until now, many students destined for St Virgil’s College have been enrolled at neighbouring St Mary’s College for co-educational Kindergarten to Grade 2 education.

St Mary’s College offers single-sex education for girls from Grade 3 onwards. However, in line with St Virgil’s College, this year their Kindergarten class will be all-girls.

It is a change which has been a long time coming, according to college principal Damian Messer.

“We’ve done a lot of research and got out there … and we think we’ve done the right thing to open up that single-sex opportunity for boys right through.”

Beginning with Kindergarten will mean that the college will have eight years to understand the learning needs and have a strong social-emotional program set up for each boy as they make the transition to the college’s senior campus, says Mr Messer.

The Kindergarten program is housed in one of the college’s existing buildings, which has been renovated to allow easy access to an outdoor play and education area for the students. A mezzanine-level cubby house has also been installed for quiet play. A bush block in the middle of the campus will be the setting for regular ‘bush kinder’ – where the boys will learn in a natural setting.

For brothers Ethan and Mason, the college’s Kindergarten program could not be better timed.

Mason, who had been studying at Brighton Primary School and who begins Grade 3 this year, was already headed to St Virgil’s, but can now be joined by younger brother Ethan who is in Kindergarten.

Mum Cassie Tennant says the coincidence was very fortunate and that both boys are excited.

“I think it’s amazing that they will be able to both go through this experience together.”

The college’s Catholic identity, seeing St Virgil’s students out in public and the opportunities for a sports-orientated child like Mason were all drawcards for the family.

The stability of education for the boys was another plus.

By 2023, St Virgil’s will offer Years 11 and 12 as part of the Greater Hobart Catholic College Extension Project.

In the greater Hobart region, co-educational MacKillop College in Mornington and St Aloysius College in Huntingfield will also offer senior schooling by 2023. Both St Mary’s College and Guilford Young College, which has campuses in Hobart and Glenorchy, will continue to offer Years 11 and 12.

But for now, Ethan and Mason’s focus will be on beginning the new school year as part of a new chapter in the life of the college.

“I feel very fortunate that my sons are going to be involved in what is a very historic year for St Virgil’s College,” Ms Tennant said.

“That’s something to be really proud of, and I can’t wait for them to get started.”