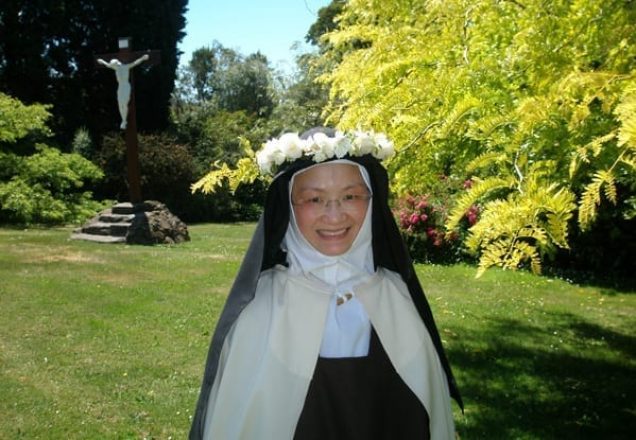 At a Mass in Launceston on December 14 last year she made her solemn vows as a Carmelite, embracing a hidden life of prayer and sacrifice.

Sr Thérèse-Marie én was born in Vietnam. However, the Do family travelled as refugees to Australia and resettled in Adelaide.

The fifth of ten children, she says she first learnt of Carmelites when she read St Therese of Lisieux’s Story of a Soul at a very age.

“I come from a deeply Catholic family where our faith has always been the most important gift in our lives,” Sr Thérèse-Marie én, now 41, said.

“Our life centred around our faith as we attended daily Mass and prayed the family rosary together.”

“My dear parents helped us to understand that a religious vocation was a special grace from God,” Sr Thérèse-Marie én said.

“My family came to Australia as refugees when I was just one year old.  We were fortunate to be given a second chance at life in this beautiful country, and we never forget our humble roots.”

Aware of how blessed she had been in her life, Sr Thérèse-Marie én says she didn’t know how to repay God’s goodness to her: so she gave her ‘all’ – her life – to God.

She studied Medicine and, after graduating, worked for a few years before joining the Missionaries of Charity (founded by Mother Teresa) in Melbourne.

She says she was privileged to serve the poorest of the poor in Australia, in Rome – where she made her profession of vows as a sister of the Missionaries of Charity – in the Philippines and in South Africa

“As a Missionaries of Charity sister, God allowed me to realise my dream of becoming a missionary doctor.”

However, God had further plans for her vocation.

“[In active religious life] I was privileged to see and experience the tremendous material as well as spiritual poverty of the people both in rich and third world countries.  In the face of so much suffering, one experiences one’s own poverty – there is a need to withdraw into silence and solitude to be alone with God,” Sr Thérèse-Marie én said.

“Although I loved being an active missionary very much, in silence before our Eucharistic Lord, the truth of God’s desire to consecrate me to belong solely to Him helped me to realise His dream for me – to be His contemplative missionary doctor of souls,” she said.

“The Lord led me to a vocation within a vocation… to embrace His suffering members in a life of prayer and sacrifice in Carmel.”

In 2013, after six years of active religious life, Sr Thérèse-Marie én left the Missionaries of Charity.

She says that leaving the Missionaries of Charity was very difficult, but in 2014 when she stepped inside the enclosure of the Launceston Carmelite Monastery she knew in the depth of her heart that she had come home.

Alongside her religious names of Thérèse-Marie (for St Therese of Lisieux and Our Lady) is ‘én’ – meaning swallow in Vietnamese.

“This swallow has flown far and wide but now she has finally found her true nest in Carmel where she will fold her wings and nestle with her Lord, praying for the salvation of souls.”

She said that she had “overwhelming gratitude” when she made her solemn profession at the Launceston Carmel on the feast day of St John of the Cross.

Presiding at the Mass was Archbishop Julian, as well as Emeritus Bishop Greg O’Kelly SJ of Port Pirie who had been Sr Thérèse-Marie én’s headmaster at school, as well as 10 concelebrating priests.

Almost her whole family, including some close friends, from the mainland were able to be present as Tasmania’s borders had opened just in time.

“It was almost miraculous, a touch of God’s tender love for me!” Sr Thérèse-Marie én said.

Her solemn profession was a day of grace for the whole of her community, says Prioress Mother Teresa Benedicta.

“… It is a gift of new life grafted into the existing community, and a sign of hope for the future – that another young woman who could have had a successful life and career using her many talents in the world has chosen to give those gifts back to God for Him to use as He wills at the service of the Church in Tasmania,” Mother Teresa Benedicta said.

That joy is something Sr Thérèse-Marie én noted when reflecting on making her solemn profession.

Quoting Song of Songs, she said: “Now I can say with joy and gratitude in my heart: ‘My Beloved is mind and I am His’ … forever.”

Main image: Sr Thérèse-Marie én of the Eucharist has made her solemn profession at the Carmelite Monastery in Launceston. Photo supplied.