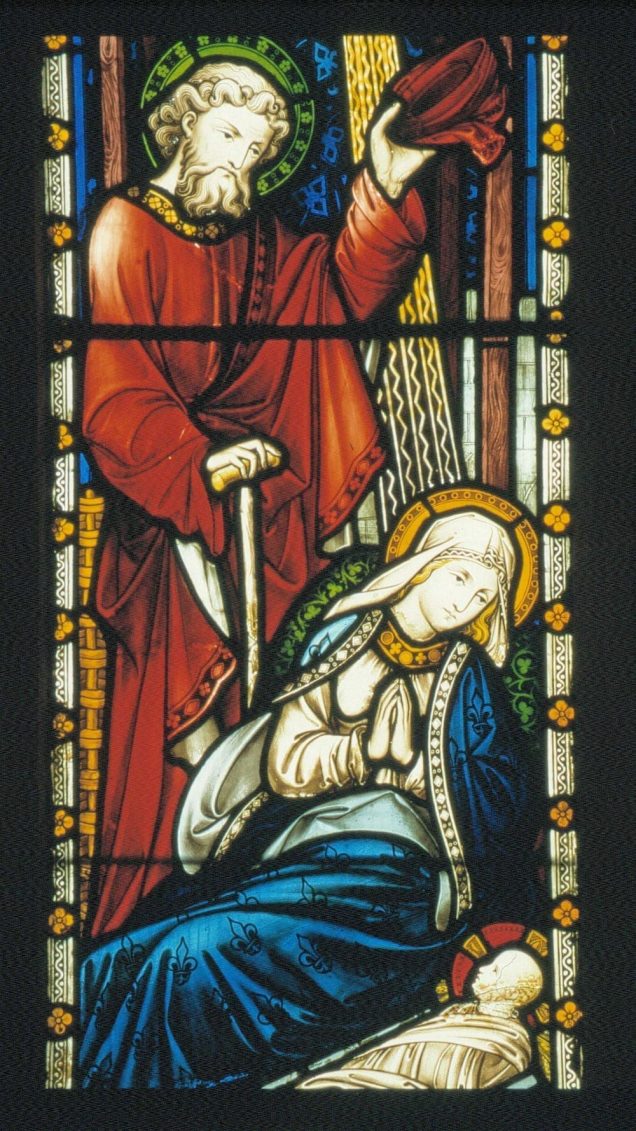 Installed in September 1869, it underwent extensive restoration in 2004-05, and once again shines with the same beauty as it had when it left the works of John Hardman & Co., Birmingham, over 150 years ago.

With the great Augustus Pugin’s pioneering work as their foundation, and continuing with his only pupil John Hardman Powell as their second chief designer from 1852, Hardmans were the leading English stained glass makers of the period. Their products, as exemplified by our window, excelled in the brilliance and luminosity of the glass as well as in the outstanding quality of the designs in both composition and detail.

Art critic Patrick Comerford’s assessment of Powell’s Irish designs is equally applicable to our window, noting that they ‘are original innovations in the Gothic style. His stained glass recreates the elegance, the refinement, the brevity that is seen in some of the finest examples of glass, sculpture and illumination of the 13th and 14th centuries. He utilises the flowing, curving lines, the flourish of drapery, the calligraphic brush-strokes and pure colour.’

The window came about as a result of a desire on the part of the Tasmanian Catholic community in 1867 to erect a suitable joint memorial to the late Bishop Willson and his Vicar-General William Hall.

At the time of its installation, the then Tasmanian Catholic Standard praised its ‘great architectural beauty’, adding a particularly significant piece of information: ‘An additional interest is attached to the window from the fact of the various subjects having been originally suggested by the late Bishop Willson; for amongst His Lordship’s papers was found a sketch of the window, with the names written by his own hand, of the sacred mysteries he wished to see represented.’ Given the Cathedral’s dedication in honour of the Blessed Virgin Mary, it is notable that her image, identified by a gold halo, appears in all five of the window’s main lights.

For this Christmas Season, our chosen illustration is a detail from the Nativity scene which exemplifies Powell’s abovementioned design skills. The slender proportions of the window’s main lights precluded a conventional representation of the Holy Family in the stable at Bethlehem, so he created a strong vertical image. The Infant Jesus in swaddling clothes lies at the foot of the scene, His recumbent Mother above Him gazing down in veneration. St Joseph stands behind Mary with his eyes fixed on the Child, the constraints of the composition precluding him from kneeling as in the usual depictions. Instead, charmingly, he makes an old-fashioned gentlemanly gesture of respect by doffing his hat.