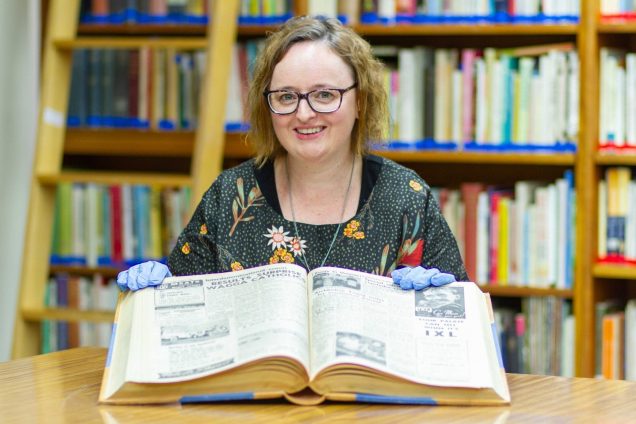 A unique insight into the history of Catholicism in Tasmania over more than 150 years is set to become more accessible.

The Catholic Standard, first published in July 1867, and associated publications, are undergoing digitisation. Some 48,000 pages are being scanned and will soon be available online.

Archdiocese of Hobart Archivist Dr Pru Francis said the process would make the stories of Catholicism in the state easily available to a wide readership while at the same time preserving the increasingly fragile original editions.

“There are fascinating stories scattered throughout the collection,” Dr Francis said.

“For many decades, parishes had their own correspondent reporting weekly or fortnightly. These reports give a rare insight into parish life around Tasmania, especially in the country parishes that would have keenly felt their isolation.

“The Letters to the Editor were sometimes quite heated with correspondence around a single issue receiving attention over many editions. International reports brought the rest of the world closer too, and the reporting was not just about specifically Catholic matters, it was more about the Church being part of the world story at the time.

“The history of Catholic organisations, including education and welfare were fulsomely reported and give the reader insight into key pastoral initiatives. The paper was funded through advertisements and they were a distinctive feature of the paper, often amusing to our 21 Century eyes.”

There are times when publication stopped and restarted; and other eras when there were two competing publications, ‘The Tasmanian Catholic Standard’ and ‘Catholic Standard’ with the latter outlasting its rival. Some copies are missing, particularly from 1891 to 1920 when the paper was the ‘Morning Star’ and then ‘The Monitor’. There are also gaps around the early 1940s and later. The Archives welcomes receipt of past copies of the Catholic paper.

The digitisation process is expected to be completed in 2020. Acrodata, a Tasmanian document management firm, is carrying out the scanning.

“This is a very important undertaking that will provide free access to the Tasmanian Catholic story by the wider community,” Dr Francis added.

Photo: Eloise Armstrong with bound copies of the Catholic Standard Newspaper from 1967.