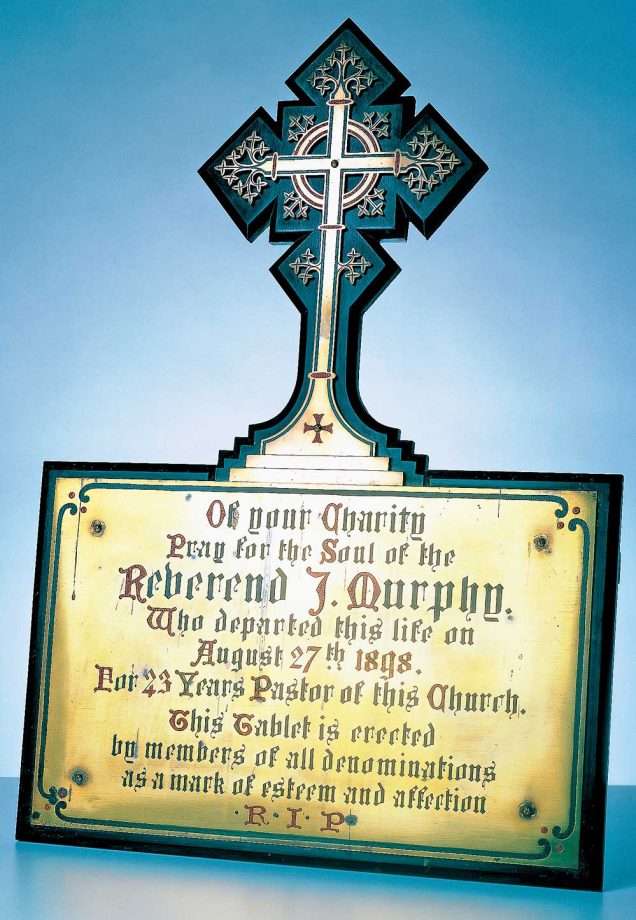 The nineteenth century is sometimes seen as an era of religious bigotry and intolerance, with little love lost between Australia’s various faith communities. This, however, was by no means always the case, and the selfless care and concern of some individuals for all who were in need cut across denominational divides. Notable examples of such all-embracing benevolence are Caroline Chisholm and our own first Bishop William Willson.

A local testimony to such a widely esteemed person was formerly to be found in St Mary’s Church, Franklin, designed by Henry Hunter. Its first permanent pastor, Fr John Murphy (c.1824–1898), was educated for the priesthood at All Hallows College, Drumcondra, and arrived in Hobart Town on 14 August 1852, having sailed from Ireland as chaplain on a convict ship. After brief service in Launceston and on Norfolk Island he was appointed by Bishop Willson to the Huon-Franklin area in March 1855 and remained there for forty-three years until his death. The people of the district wished to mark his passing with a memorial and decided to erect a brass in the church. The design chosen by architect Douglas Salier of the firm founded by Henry Hunter was a slightly simplified copy of a monumental brass designed by Pugin, a rubbing of which had been obtained by Bishop Willson during his visit to England in 1847. It was one of four factory rubbings acquired by Willson and entrusted to his protégé architect Hunter in 1855 for use as exemplars in the ordering of future monumental brasses from Hardmans in Birmingham. Interestingly, the English brass from which the rubbing was taken had been made in 1844 as a memorial to Emily Elizabeth Larden, the wife of an Anglican clergyman of Worcester.

Murphy’s brass was made by the Hobart engineering firm of A. Entwisle in 1900. Part of the inscription on it reads: ‘This Tablet is erected by members of all denominations as a mark of esteem and affection R.I.P.’, a permanent tribute to his universal regard. One other copy of this brass design had been made a little earlier than the Franklin one. It is to be found in the south transept of St David’s Cathedral, Hobart. [Note: following the closure and sale of St Mary’s, Franklin, the brass was placed in the care of the Huon Valley Parish.]