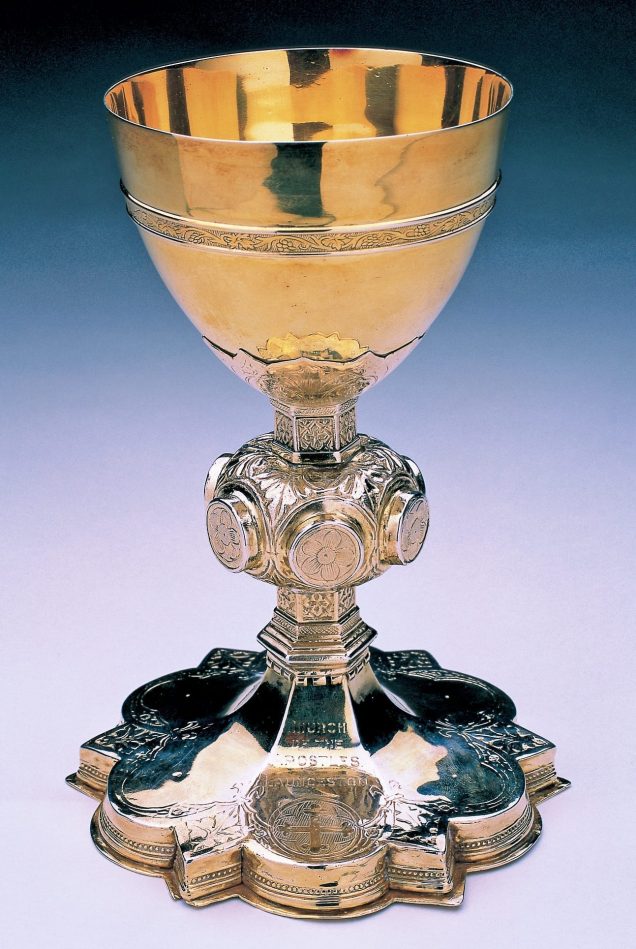 This remarkable chalice is a real survivor, having been rescued from dilapidation several times during its existence of around two thirds of a millennium. Crafted in the workshop of a master goldsmith in the Italian city of Siena during the 1370s, its stem was originally decorated with coloured enamels.

The chalice was acquired by Bishop Willson during a visit to Italy in the Spring of 1847, by which stage it had lost both its bowl and its enamel work. Not one to regard such an object as a mere antique, his close friend Pugin, the great English architect and designer, had it repaired in December of that year by Hardmans, the Birmingham firm which manufactured all his metalwork, this task including a new bowl to his design. Willson returned with the chalice on the barque Tamar in 1848 and gave it to the mission in Launceston where, in 1864, he would start to build Henry Hunter’s large Church of the Apostles in the unfulfilled expectation that it would one day become the cathedral church of a suffragan Tasmanian diocese.

In 1897, some work was carried out on the chalice by Messrs Gardiner & Co., Launceston’s largest manufacturing jewellery business. Wood ballast was added under the foot and secured in place by a flat plate cut to the profile of the base. One lobe of the foot was engraved with ‘CHURCH OF / THE APOSTLES / LAUNCESTON’. The firm held a special certificate as ecclesiastical jewellers for the whole of Tasmania, the appointment having been made in the last decade of the nineteenth century by Willson’s successor, Archbishop Daniel Murphy. Regrettably, this alteration was of necessity somewhat flimsy because the only way of attaching the new pieces was by way of a thin threaded metal attachment to Hardman’s larger threaded post which the latter firm had been obliged to add in 1847 so as to connect the new bowl with the original Sienese stem. Perhaps inevitably, this modification failed when the thin post was shorn off as a result of the bowl being wiped multiple times a week following the introduction of Communion under both kinds in the aftermath of the Second Vatican Council.

And so this precious chalice remained in pieces until 2002 when it was restored to its post December 1847 state by the Carlton gold and silversmith F.J. Rocca.