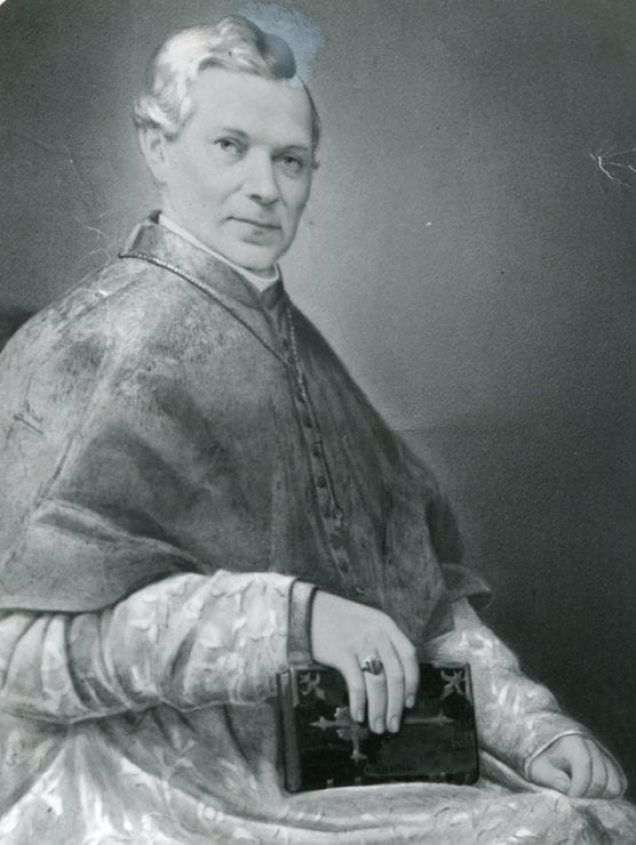 Archbishop Murphy was born in Belmont, Co. Cork, Ireland, in 1815. He was Bishop (Vicar Apostolic) of Hyderabad (1846-1866) before being appointed coadjutor Bishop of Hobart in 1865. In 1866 he succeeded Bishop Willson, and in 1888 Bishop Murphy was made Hobart’s first Archbishop by Pope Leo XIII. Archbishop Murphy died in George Town, Tasmania, in 1907.

“But the more we know, the more clearly we see, how little we know.”

When he died in 1907, Archbishop Daniel Murphy was among the oldest bishops in the world. Formerly Bishop (Vicar Apostolic) of Hyderabad, India, he was appointed coadjutor of Hobart in 1865, succeeded to the see in 1866, and was made Hobart’s first Archbishop in 1888 by Pope Leo XIII.

Archbishop Murphy’s long Tasmanian episcopate encompassed a period of great change in the Church and the world. One of his most lasting contributions to the life of the Church in Tasmania was the rebuilding of St Mary’s Cathedral in Hobart and the development of the wider Catholic precinct that surrounds it. While the Cathedral’s foundations had been laid and building commenced under Bishop Willson, it was Bishop Murphy who opened the Cathedral in 1866. Moreover, because of structural defects the Cathedral had to be partially demolished, redesigned, and rebuilt before it could be completed. As well as overseeing the raising of sufficient money for this endeavour, Archbishop Murphy also established the adjacent St Mary’s College, designed by Henry Hunter. Through this and other schools Archbishop Murphy showed himself a strong advocate for Catholic education.

Irish by birth, Archbishop Murphy populated Tasmania with Irish priests and religious. Among these were the Presentation Sisters, whose first superior was Archbishop Murphy’s own sister. Archbishop Murphy proved adept at managing the sectarianism of his age. When an anti-Catholic sensation gripped Hobart in 1879, he prevented disaffected Catholics from rioting and redirected their energies to a peaceful demonstration of dignified solidarity in the face of prejudice.

Archbishop Murphy went on pilgrimage to the Holy Lands in 1892 and travelled to Rome for the First Vatican Council (1869-70), thereby becoming the first Bishop of Hobart to attend an Ecumenical Council. He brought these experiences to his preaching, telling Tasmanians in 1874 that “those who have studied the constitutions and decrees of ecclesiastical councils and observed their action on society, will acknowledge how eminently conducive they have been to its progress and the advancement of religion, on which true progress depends.”

Similarly, Archbishop Murphy was involved in advancing scientific knowledge. An avid astronomer, he gave technical presentations to scientific conferences in Hobart in 1892 and Brisbane in 1895. He was a member of the Royal Society of Tasmania and, as a mark of the international respect he attracted for this work, his obituary was printed in the Journal of the British Astronomical Association. But of more importance was that fact that Archbishop Murphy was known to encourage the students of Hobart to look at the stars, even lending them the use of his personal telescope to do so. He also invited local dignitaries to watch celestial events with him, making the quest for knowledge a tool for showing Catholicism’s intellectual dynamism.