Restoring St Mary’s a ‘story for the ages’ 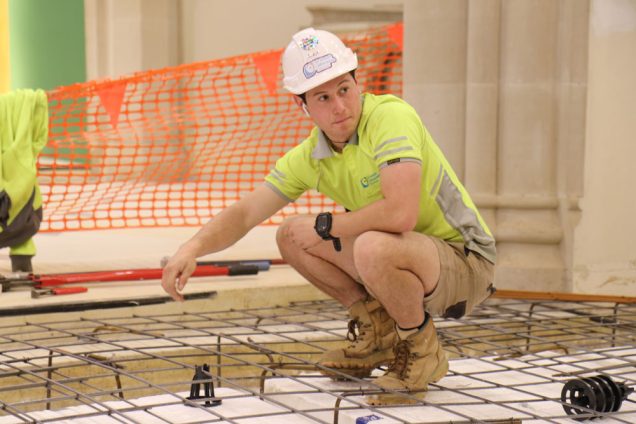 Twenty-one-year-old Alex Tonino Zito was one of the St Joseph Affordable Homes (SJAH) apprentices who worked on the restoration of St Mary’s Cathedral.

He describes the experience as “a story for the ages”.

“It was overwhelming,” Alex said. “It was definitely eye-opening for me as I didn’t quite realise the privilege of working on a project of that size.

“I look back now and I think, wow, it was actually a privilege to work on a job of that size and a job like that.

“Not many people can say that ‘I restored a 162-year-old building… so, definitely a story for the ages.”

For three months Alex was engaged in removing the old vinyl flooring inside the Cathedral.

He was also involved in relocating the Bass altar and preparing the sanctuary floor to receive the new altar.

Alex said the sense of the history of the building was enhanced when they discovered the headstone marking the final resting place of the first Vicar General, Monsignor William Hall (1807-1866), in the former aisle beneath the Bass altar predella.

“When we uncovered it we all paused… it’s not often you come across a 156-year-old headstone,” he said.

Having worked as a carpenter for five years, Alex said working on the Cathedral was an invaluable experience and a significant achievement in his career.

“I went in with a very high-level eye for detail, that’s how I’ve been trained over five years, and with this job now coming to an end, that has become drastically bigger.

“That’s a skill I’ll take away with me and put into other projects I do in the future… I can’t believe I’ve got a building to thank for that.”

CEO of St Joseph Affordable Homes, Ben Wilson, said he was “extremely happy” with the work their apprentices completed during the restoration process.

“The Cathedral restoration has been an amazing way to showcase the talents and craftsmanship of the SJAH workforce. It has provided our apprentices with an opportunity to be involved in a very historic and important project for the Archdiocese of Hobart.”

Alex said if he had children of his own one day he hoped to show them the Cathedral and tell them about the role he played in its history.

Returning to see the restoration work completed, Alex said he was amazed at the transformation of the building.

“Honestly, it’s breathtaking… when I [first] walked in, it was dull, it was gloomy, it was dark. You could definitely see it had age. Now, it looks like it’s literally been brought back to life.

“It is, honestly, one of the greatest things I’ve ever seen happen so far in 21 years.”