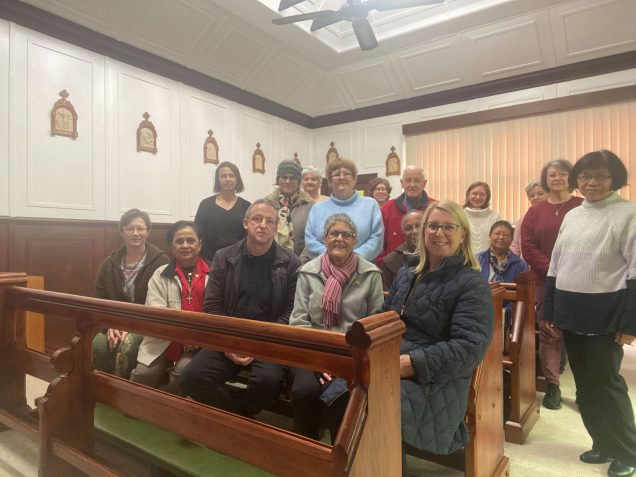 The importance of inviting God into ‘the messiness of our lives’, in trust and humility, was one of the key messages of a Carmelite weekend retreat.

The Launceston-based Carmelite Secular Order organised the retreat entitled ‘The Spiritual Genius of St Therese of the Child Jesus’ at the Emmanuel Centre, Newstead, in October.

The retreat director was a Sydney-based Carmelite friar, Fr Aloysius Rego OCD, who has written articles and books on the ways in which his favourite saint draws people closer to God through prayer.

Therese of Lisieux OCD, also known as St Therese of the Child Jesus, was a French Discalced Carmelite nun who died aged 24 in 1897. She was canonised in 1925. Pope Pius X is said to have described her as the greatest saint of modern times.

Carmelite Secular Order member, Sandra Walkling OCDS, a Launceston Catholic parishioner, said that the ‘beautiful weekend retreat’ had attracted 17 people from around Tasmania keen to learn more about the life of St Therese.

“Fr Aloysius brought to us many insights into her life, her struggles and her frailties, even within her own prayer life,” she said.

“However, even in her darkest times, she gave herself entirely to God in trust. As Fr Aloysius pointed out that to St Therese, prayer was speaking as a child to a loving Father and she knows He understands her.

“He also talked about how we could adopt the examples set by St Therese in our own lives, by allowing ourselves to let God into our own messiness in trust and humility and to allow God to be in control of whatever concerns us, just as a little child relies on their loving parent to guide them.”

The Secular Carmelites organise an annual weekend retreat to help Tasmanians learn more about Carmelite spirituality through the examples of Carmelite saints, three of whom have been declared Doctors of the Church.

The Secular Carmelite Order meets in Launceston on the second Sunday of each month.