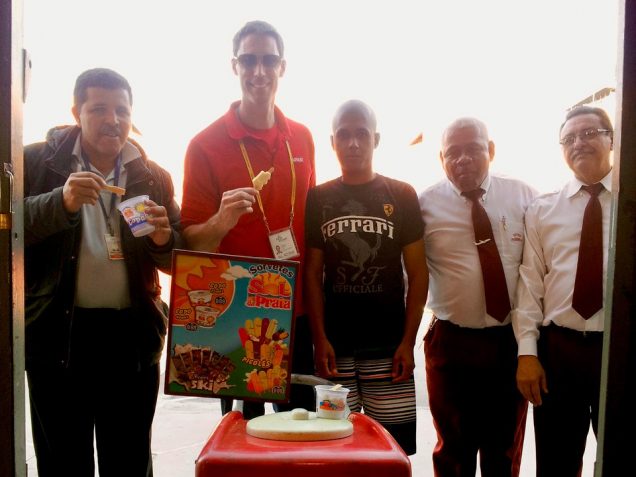 There’s a waterfront-warehouse on the edge of Rio de Janeiro in Brazil, that for one week in 2013 was converted into ‘Aussie Central’; a sleeping-bags-on-foam-mattresses city housing thousands of World Youth Day pilgrims.

I was there in a working capacity, stationed at the front entrance next to security guards checking thousands of credentials as groups came and went.

One day a young local man cautiously approached with an ice cream cart, quietly introduced himself and asked if he could sell ice creams at the entrance.

He looked surprised when I replied, “Sure. I’ll let a few people know you’re here.”

He wheeled his cart to the side and stood there nervously as I stepped inside to put the word out. Fifteen minutes later he departed with an empty cart asking, “Can I come back with more?” The crowd of Aussies still wanting an ice cream suggested, “Yes, quickly.”

That young man sold out numerous times over. Many pilgrims stayed to chat to him as they ate their ice creams, but he didn’t do a great deal of talking, resorting to smiling and nodding his head.

On the final day, as weary pilgrims prepared to depart, a thunder storm opened up. I was seated inside when a few rain-soaked pilgrims ran to me pleading, “The ice cream man, he’s not allowed in. Can we let him in? Please!”

Without credentials he’d been left standing alone in the downpour. “Yes, he can stand with me at the desk.” The pilgrims were excited to call him inside.

Soon, the thousands of pilgrims had left, and the warehouse fell into silence. The young man stared out across thousands of square metres of foam mattresses and forgotten items. He turned to me and asked in Portuguese, “What will happen to the mattresses?”

I checked with the coordinator and relayed back to the young man that, “None of it has a home, would you like some?”

He walked in a daze to the nearest section, picked up what he could, loaded them on top of his cart and set off for home, but arrived back soon after, apologising that, “I only made it onto the first street of the slums and everyone asked me for a mattress, so I gave them away. Can I take some more?”

That afternoon he distributed around fifty mattresses to his neighbours in the slums, before finally heading home clutching a bag filled the best left-behinds the security guards could find.