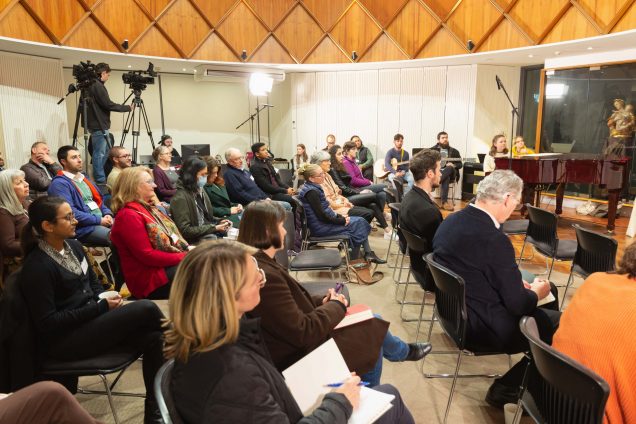 Faith and friendships are flourishing as Catholics gather in hubs around the state for the Evangelium Project.

The project, an evangelising initiative in the Archdiocese of Hobart, has more than 210 registered participants at 23 homes, parishes and presbyteries around the state, from King Island and Ringarooma to Fingal and Cygnet.

Archbishop Julian developed the Evangelium Project to help Catholics become missionary disciples as they rediscover the joy of the Gospel of Jesus Christ.

After just one Evangelium session, hub leaders have already highlighted the growing bonds of faith and fellowship and have spoken of plans to continue meeting with fellow participants after the Evangelium Project ends.

Manu Thomas is a parishioner at St Francis Catholic Church at Riverside in northern Tasmanian and is the leader for the Syro-Malabar community hub that meets at his Riverside home.

He welcomed the Evengelium initiative not only as a Catholic ‘refresher course’ but also as an on-going opportunity for participants to deepen their faith and share it with others.

He explained that his hub comprises about ten people – adults and children – originally from the Kerala state in southern India, who all speak the same Malayalam mother tongue, and who worship at various Catholic churches in the greater Launceston area.

“It is a refreshment, if someone has lost touch with the Bible, … [with] Catholic life. We need this kind of project especially if we lose touch with God. It helps us to regain that and it is important for the kids too, [to see] Catholic faith in action.

“This is also an opportunity for us to build bonds of friendship as we get together, and we look forward to getting together … after the [Evangelium] project once a month to do the Rosary.”

King Island hub leader Anna De La Rue, of Nugara, explained that her parish had opted to catch up on the Evangelium project at the regular weekly convent lunch that follows the island’s Sunday Liturgy of the Word service at nearby Our Lady Star of the Sea Church in Currie.

Despite some wifi connectivity issues the first week, Mrs De La Rue welcomed the initiative as a boost for the island’s tight-knit Catholic parishioners.

“It is something worthwhile for our little faith community…having this opportunity helps to reinforce our faith,” she said.

Other hub leaders also reported how rewarding it was, venturing out on cold winter evenings, to meet together with likeminded people as a community of faith, with some discussions continuing long after the official presentation ended.

Meanwhile, Archbishop Julian has praised the “fantastic response” to the project, which started on Tuesday, 24 May with a livestreamed presentation from the Cathedral Centre in Hobart.

“It was a wonderful evening of prayer, music, reflection on the Word of God, and of entering more fully into an awareness of God’s presence in our lives,” Archbishop Julian said after the first instalment.

“Following a teaching based on Scripture, participants broke into small groups to ponder and discuss God’s call in their own lives.”

During the first session, Archbishop Julian explained why he became a priest.

“[It is also] a chance for us to reflect and listen to one another about the way that God has been working in each of our lives.”

The first Evangelium module continues until 14 June and looks at Developing the Heart of an Evangelist. Go to evangeliumproject.com for more information.