Farewell to Br Ed, ‘a foundation stone of parish life’ 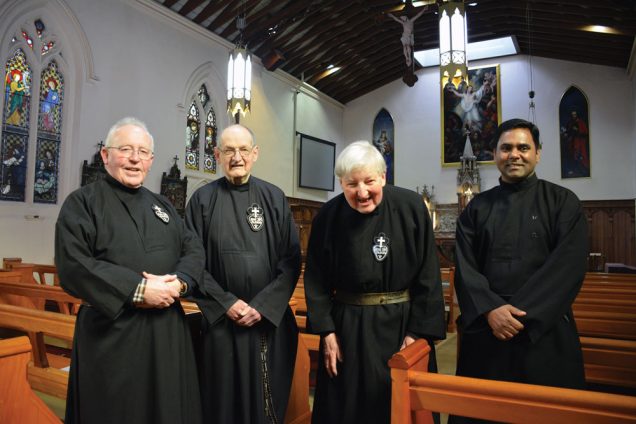 The Hobart Catholic Parish has bid a fond farewell to Brother Edward Braden, who has moved to Geelong to retire.

Since his arrival from Victoria in 1971, Br Ed has been an integral part of the parish and Passionist Community based at St Joseph’s Catholic Church.

“He has been at St Joseph’s since 1971 and when he turned 80 he started to reflect on his time in Hobart and he decided to go to a retirement village in Geelong to start a new life.

“He realised, for health reasons, his ministry here was no longer possible for him and so he decided to continue enjoying life in his 80s nearer his family. He has a very positive attitude to retirement.”

Fr Addicoat said Br Ed had made an impact on many, particularly in relation to his kindness and warm welcome to parishioners, visitors and refugees alike.

“His ministry here was very much a welcoming ministry,” Fr Addicoat said.

“He was noted for his ability to remember names and faces and almost three generations of families.

“Most Sundays he was seen outside church welcoming and farewelling visitors and parishioners alike. He has a very gentle nature and was able to relate to a wide range of parishioners – young and elderly alike.

“When the migrant refugee groups started to come to the Hobart area he was able to make friends with them and invite them in for morning tea and those sort of social interactive situations. He helped them with their English and was interested in them and what they were doing and where they came from. That was a significant part of his life here.”

Br Ed also did spiritual guidance with some people after completing spiritual direction and pastoral leadership courses that were run in diocese in early 2000s.

Fr Addicoat recalled that Br Ed, who will celebrate his 60th year of profession next year, had countless positive interactions with people, gently encouraging them in their chosen vocations and occupations, and visiting the sick in the parish.

“He was a supporter of religious gatherings of religious orders of brothers and sisters and priests. From our community point of view, he will be missed in terms of the support he gave and the life that he lived with us as a religious group.

“He is a very prayerful person. He has a really practical spirituality [approach] to life and to his faith.”

Fr Addicoat has known Br Ed since 1968 when they met at the Holy Cross at Templestowe, the Passionist monastery in Melbourne.

“He is just a genuine person. He is a good guy. He has lived a simple religious life. The fact that he been held in such high regard, not just by parish but the wider Hobart churches, is significant.

“Sometimes the best people are those that aren’t noticed so much; he is a foundation stone of parish life.”

The Passionist charism was very much evident in Br Ed’s approach to the people he encountered in life.

“Our charism is to proclaim the passion of Jesus, and he was able to live that and express that,” Fr Addicoat added. “His life was and is an expression of that charism – proclamation not by word, but more by deed.”

Passionist Provincial Superior Fr Tom McDonough, who attended Br Ed’s farewell in Hobart, wrote in the online newsletter: “In his quiet prayerful presence and his courageous coping with health issues, Ed has been himself an icon of Jesus crucified. His presence has been compassion in action…

“Ed will be very much missed by his many friends in Hobart.”