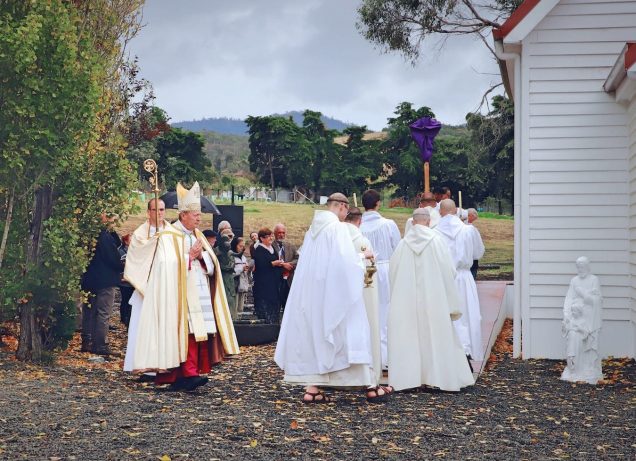 The church used by the Benedictine monks at the Notre Dame Priory in Colebrook has been solemnly blessed.

Named in honour of Our Lady’s Immaculate Conception, the church is used by the monks to celebrate Mass and the Divine Office – both of which are open to the public.

Previously named Holy Family Church, the church had most recently been located in the Launceston suburb of St Leonards, and was transported to Colebrook in December 2019.

Significant work has been done to the building since its arrival including adding insulation, repainting both the interior and exterior walls, installing a new roof, replacing the glass windows, new lighting, heating and re-polishing the floor. An accessibility ramp has also been built, and an audio-visual system for livestreaming has also been installed.

Archbishop Julian visited the priory and bestowed the pontifical blessing on March 25.

However, the church has been in use since December 8 last year – the solemnity of the Immaculate Conception.

Main image: The church of the Notre Dame Priory was blessed on March 25. Photo: Mishka Gora.